Long time readers may ask themselves: what's with the strange title? Where's the traditional "xyz days of postmarketOS" post? Truth is, that this is a low-key update post, one that is rather "rushed out" in a few hours instead of spending a whole week on adding all the fancy photos and webm animations and so on. Consider this the minimal effort of making the project not look dead on the homepage, while not getting too distracted from the deep development lands that our minds are sunken into.

We are on track with our project direction 2020 plans. In a nutshell, we will create a stable releases of postmarketOS based on Alpine stable, while still having the development channel based on Alpine edge. Furthermore, the status of supported devices will become clearer. The PinePhone, possibly the Librem 5 and few more will be labeled as officially supported in their deviceinfo and in the wiki. postmarketOS should be usable as daily driver on these. All other devices will be categorized further, depending on active maintainer count and what is working. Think of it like the AUR: still useful, but sometimes broken and you need to know what you are doing when using these. The devices will get split into their own git repository, so one can use the device packages with both the "edge" and "latest" (stable!) channel of all other packages. @ollieparanoid and @Minecrell are evolving pmbootstrap as needed.

@bshah, @Danct12, @MartijnBraam, @PureTryOut and @z3ntu are working hard on PinePhone support for postmarketOS, here's a recent video of postmarketOS with Phosh on the PinePhone. Calls are working, but audio currently requires lots of manual configuration and isn't integrated automatically yet. But all Linux distributions targeting the PinePhone are in the same boat regarding calls and audio, we are working together to resolve this. @craftyguy added the Librem 5 phone to postmarketOS, building on his earlier work of the devkit port. 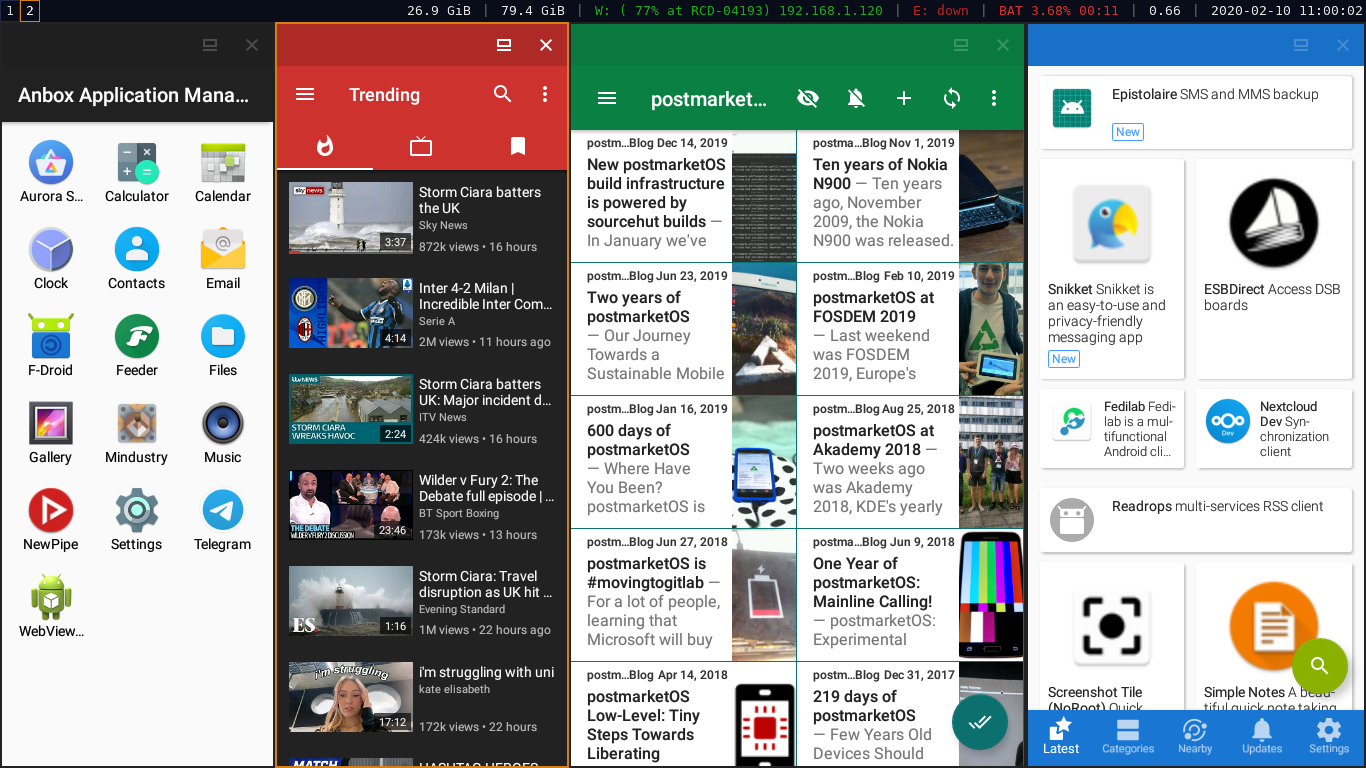 @afontain has impressive results to show regarding Anbox: the Android compatibility layer, that was never tested much outside of Ubuntu, is for the first time running on postmarketOS / Alpine Linux! Right now, it is x86_64 only, and only on his computer. But the heavy lifting has clearly been done. From here on, it is realistic that we can run it on ARM phones with postmarketOS in the near future. If you know a thing or two about Linux and would like to help out, he's looking for other developers to help with further streamlining and testing.

Regarding (close to) mainline Linux on Android phones, simply too much has been going on to recount it here. If you want to get a taste of it, check out the excellent "Enable modem on mainline MSM8916 devices" patches by @Minecrell and @TravMurav.

FOSDEM 2020 was amazing. @PureTryOut and @MerlijnWajer had the opportunity to present their talk "Regaining control of your smartphone with postmarketOS and Maemo Leste". As part of the Freedom main track, in the huge Janson room, with a capacity of no less than 1415 people! Besides that, the usual exchange of stickers happened, various BoF sessions were attended, like the one from Sourcehut and the one we set up, the Linux on Mobile BoF. We had lots of inspiring conversations with our friends from the various great "true Linux on smartphones" projects in the scene. And not just during that BoF. But also while having dinner, and in one instance, while walking to a restaurant at the other end of the city, eating there, walking all the way back, and then exhaustedly playing a few rounds of Exploding Kittens in a hotel lobby.

So let's wrap it up here. If this post was too short for your preference, read one of the classics just to recall how far all the amazing contributors have taken the project!