Our blog posts became shorter and shorter, as we decided that currently time is better spent on actual development than working two weeks on another epic blog post. This three years update post follows suit, so take a big breath and let us rush you through a few representative picks of what has been going on in the depths of our git logs.

postmarketOS was always based on the bleeding edge version of Alpine Linux. Since last week it's also possible to install postmarketOS based on the new 3.12 stable release of Alpine, in combination with a new stable v20.05 branch of the postmarketOS packages (instead of master). This marks the first beta release v20.05 of postmarketOS. It's a very rough one, polishing will be done in the second beta. Most importantly, the stable release channel lets us avoid breaking changes from upstream, and our infrastructure is ready for future releases. Having a stable release channel has been a goal for years, and we have finally completed it!

We have over 200 booting devices now. Yes, booting is the operative word, with most of these ports you get more of a Raspberry Pi alternative than a functional phone experience with postmarketOS. Therefore, we started to categorize the devices. All existing device ports have been moved to the testing category, and can be moved to community or main depending on which features are working and how well maintained a port is. Only community and main devices will be cherry-picked to the stable branch.

Currently the only device in the main category is the QEMU virtual device. It doesn't have any special hardware like a modem or GPS, so it was easy to make it comply with the requirements for main. Once some minor changes are done to the PinePhone port, it can be moved from community to main as well.

There are also some devices pending to be moved into community from testing, like the Nokia N900, Xiaomi Redmi 4X, Motorola Moto G4 Play, Samsung Galaxy A3, Samsung Galaxy A5, Samsung Galaxy S4 Mini Value Edition and Wileyfox Swift. This is mostly possible, because they run a mainline Linux kernel already, or in case of the MSM8916, are currently being mainlined. The MSM8974 devices are also candidates, such as the Nexus 5, Fairphone 2, OnePlus One and the Samsung Galaxy S5.

Earlier concepts of a channel-agnostic pmdevices repository were scrapped. This would allow using the same device packages with both the edge and stable channels, but at the price of making the device packages more complicated. Instead of doing that, we will treat the device specific packages like other packages and cherry-pick only the rather risk-free patches to the stable branch. 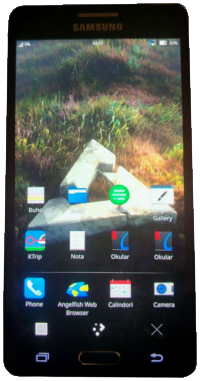 If you are interested in mainlining your device, check out the all-new Mainlining wiki page. It gives an overview of all ongoing efforts, across 12 SoCs. For those, someone in the postmarketOS mainline room should be able to get you started and help out to some extend. We have a new ~postmarketos/upstreaming mailing list, which we put in CC for the patches we upstream into the Linux kernel.

While we won't go into detail like last year and recount all the amazing things that went on in the postmarketOS mainlining world since then, we can point out one highlight: phone calls working on MSM8916 with audio!

The photo shows a Samsung Galaxy A5 2015 running Plasma Mobile on a close to mainline kernel, one of the many new mainline device ports that we have added to pmaports over the last year.

@ollieparanoid will be able to work full time on postmarketOS for the rest of the year. This is made possible by NLnet through the NGI0 PET Fund. Special thanks to his employer sysmocom for being a huge help in making this a reality.

Current stats and in brackets the diff to last year:

Join us in the effort to create a free software mobile operating system where you truly own your phone, with updates until it physically falls apart! We have a lot of tasks where you can help out, from hacking to blogging, it's all on our contributing page. For new device porters specifically, check out our brand new #postmarketos-porting channel.

To everyone who put their time and effort into postmarketOS, by now far too many people to list here: you know who you are, thank you for making postmarketOS possible. Together we can bring postmarketOS to the daily driver goal!