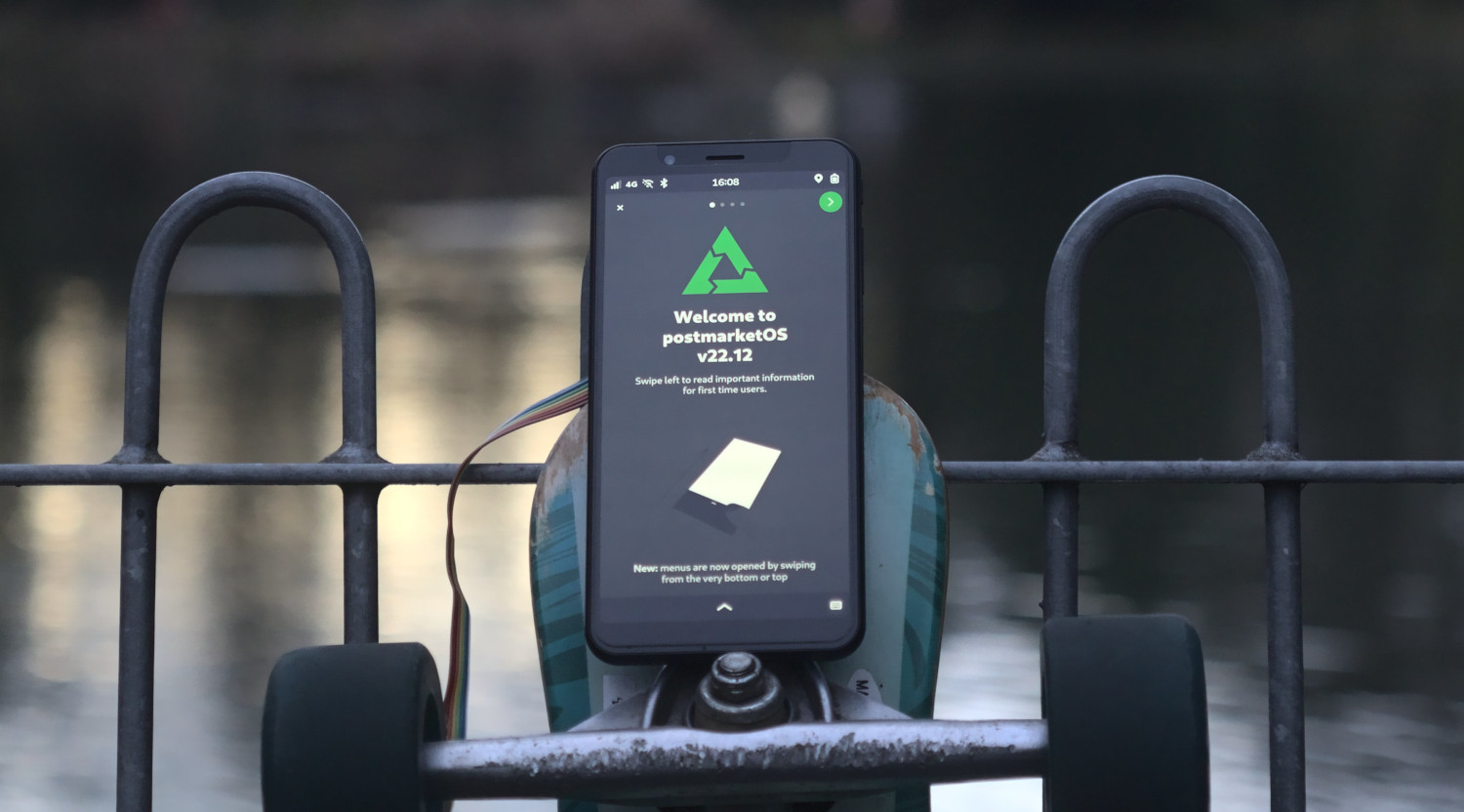 No matter if you can still whip out a skateboard around this time of year to do kickflips and indy 900s, or if you'd need a snowboard for that: the all-new postmarketOS v22.12 release is out! As usually, it's based on the latest iteration of excellent upstream developments in Alpine. See the 3.17 release notes for more about that.

v22.12, like previous releases, is geared mainly towards Linux enthusiasts; it may be a bit rough around the edges so expect some bugs and make sure to read the known issues section in this very blog post. Help with identifying and resolving issues is always greatly appreciated.

As with all releases, you won't find a description of each and every commit that was done in postmarketOS edge and Alpine edge before the new release was cut. That's what git log is for. But here are some highlights.

Calls For SDM845 On Mainline

All devices listed above don't run an Android kernel - their kernels are (close to) proper mainline Linux. If you have been following this project for some time, you know that getting phone calls working on proper mainline Linux is not a trivial task. In the Android world this relies on proprietary programs in userspace that talk to the vendor's Android kernel fork on one hand, and modem on the other hand.

With mainline, the functionality from the downstream kernel needs essentially to be re-implemented to get accepted upstream. And everything that the proprietary userspace code did needs to be replicated in free software code, mostly by extending ModemManager/oFono and writing tools like q6voiced to glue everything together. The latter was originally written for the MSM8916 SoC where phone calls have been working for quite some time in postmarketOS. But with this very release, it is also possible to use it to call your friends from SDM845 based devices such as the OnePlus 6/6T, SHIFT6mq or Xiaomi Pocophone F1. As mentioned earlier, this is hot new experimental new stuff, expect serious bugs. But nevertheless, we are excited to share this amazing achievement!

This release, testing didn't go as smoothly as in the previous releases. Especially on the less common devices, such as the PineTab, RockPro64 and some of the Androids, we weren't able to ensure that there are no regressions. If you are affected, consider helping out with related issues, create new issues where missing and consider becoming a co-maintainer for your device. That would be the best way to ensure it keeps working with new postmarketOS releases.

How To Get It

For existing installations, see the upgrade to a newer postmarketOS release wiki article. And for new installs, see download and make sure to read the wiki page for your device.

And so we end another postmarketOS release cycle, and another year. Everything you read above, and the many, many more small improvements that would be too plentiful to recount here, would not have been possible without the amazing postmarketOS community. A big thanks to everybody who contributed to postmarketOS, to Alpine or to any of the numerous upstream components we use!