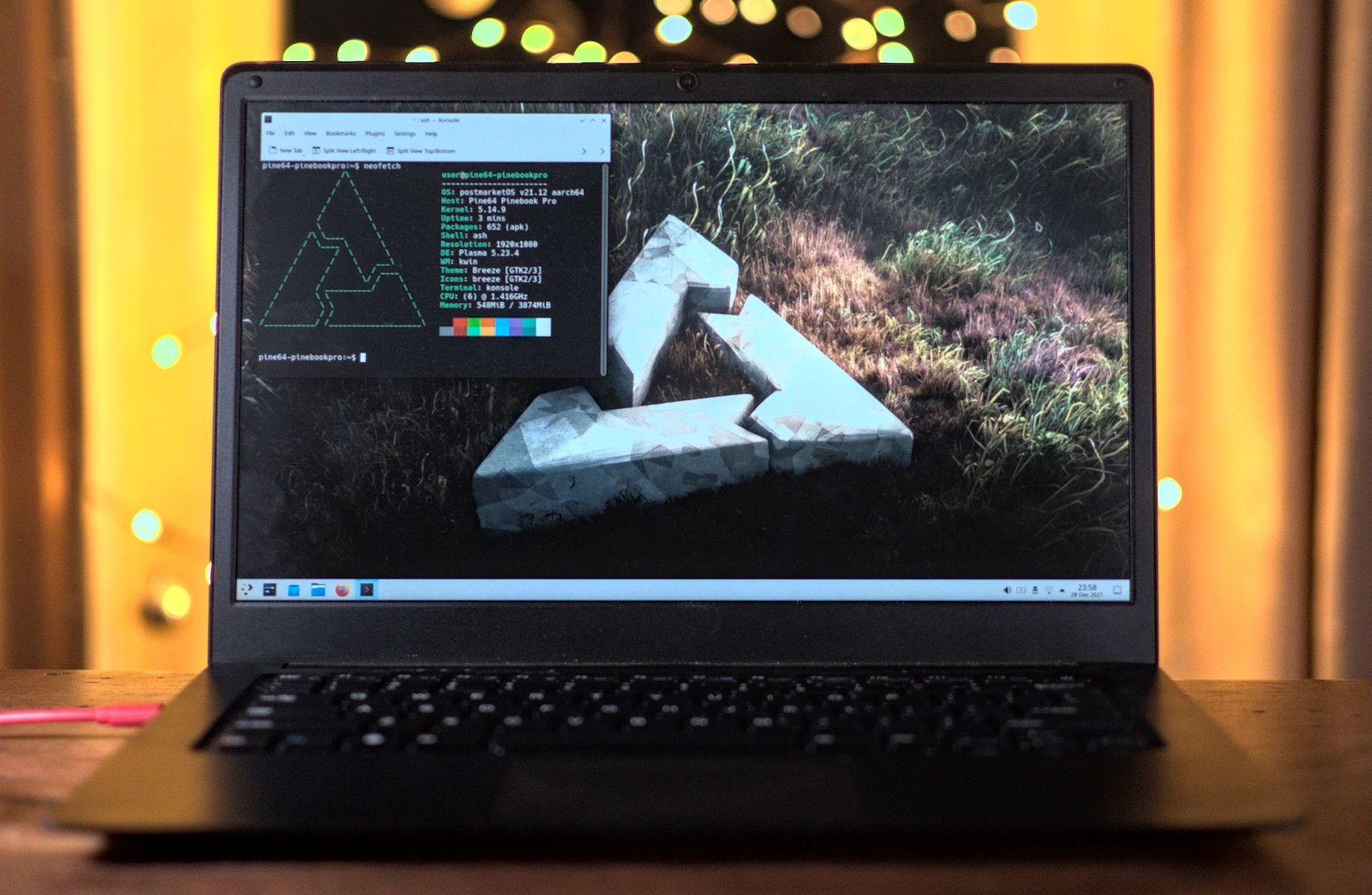 It's the end of another year, and we're happy to announce the v21.12 release of postmarketOS, based on Alpine Linux 3.15!

Thanks to our amazing contributors, the amount of supported devices has been increased to 23 (from 15 in v21.06). As in previous releases, we ship pre-built images for phones and tablets with the mobile-optimized Phosh, Plasma Mobile and Sxmo interfaces. Other form factors, such as the PineBook Pro get images with different interfaces as it makes sense. In the picture above it runs Plasma Desktop, and besides that we have Gnome, Sway, Phosh and Console. Find all images at the download page.

v21.12, like previous releases, is geared mainly towards Linux enthusiasts; it may be a bit rough around the edges so expect some bugs. Help identifying and resolving issues is always greatly appreciated. 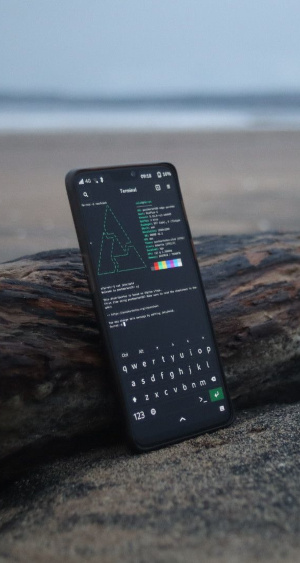 The OnePlus 6, enjoying a fun day in nature with mainline Linux and Phosh. pmOS tweaks was used to deal with the clock and notch. 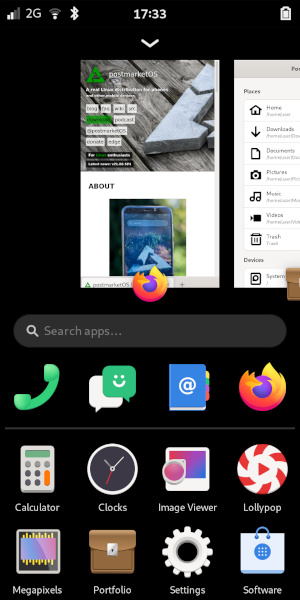 The combined application and task switcher of Phosh 0.14.0 with Firefox and Portfolio. 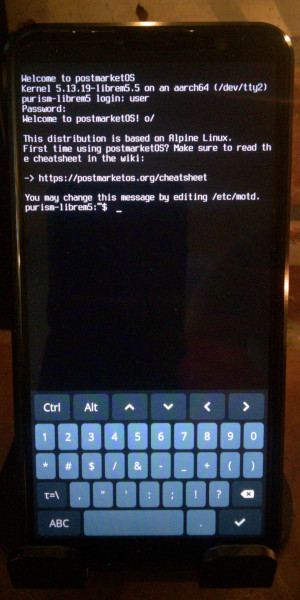 Sometimes, unfortunately, things go sideways and the UI locks up or crashes. On a system with a physical keyboard, you can easily jump to a new TTY to poke around, restart things, or even just cleanly reboot. This is much more difficult on a device with no physical keyboard... until now! TTYescape is an amazing tool that uses hardware keys to quickly send you to a second TTY and launch a touch keyboard so you can easily recover from situations that would have required a force reboot in the past. Make sure you remember the key combination:

Run the same steps again to get back to your UI. Starting with postmarketOS v21.12, this works with Sxmo, Phosh and Plasma Mobile. Read more about it in the wiki page. 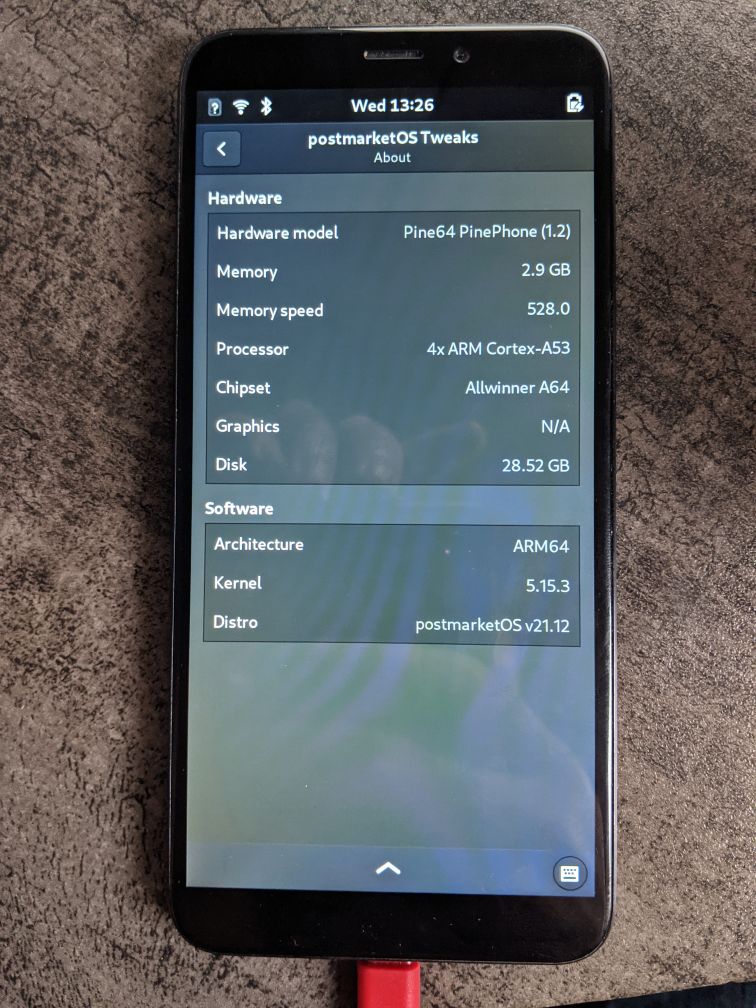 Tweaks 0.9.0 is now able to control the app drawer filter in Phosh. On a related note, postmarketos-tweaks has been able for a long time to set the suspend timeout for phones that can go into deep sleep (notably the PinePhone). With postmarketOS v21.12 we set the default value from 15 minutes to two minutes, which saves a lot of battery.

The tool that generates boot files (postmarketos-mkinitfs) was rewritten and supporting scripts for installing boot-related files (boot-deploy) were improved to help with overall reliability when updating the kernel and initramfs. Files are installed atomically, so having an unbootable device after an update should be a thing of the past.

Firefox >= 91 had several design changes and required parts of mobile-config-firefox to be rewritten. While at it, the navigation bar was moved to the bottom after asking the community in a poll whether it's a good idea or not and a whole bunch of UI glitches were fixed. u-block origin is also installed by default now. Details and photos in this thread. 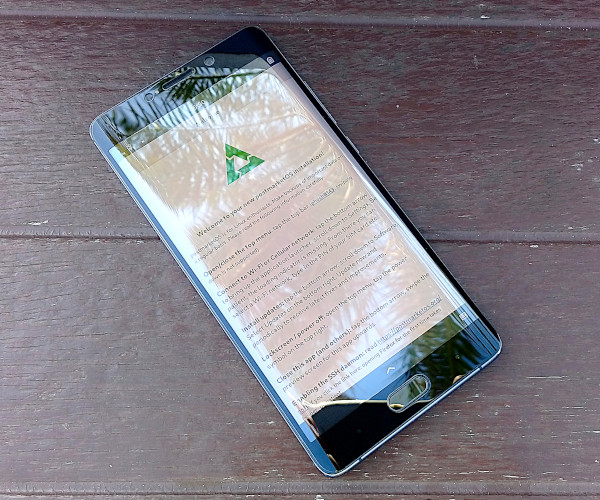 Xiaomi Mi Note 2 displaying the welcome app on a sunny day below a palm tree. 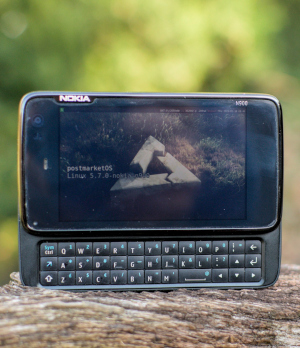 Conky has been displaying the 5.7 kernel for too long in the pmOS port of the Nokia N900.

If you read the above list carefully and have been following postmarketOS for a while, you probably noticed that the N900 isn't in the list anymore. Despite the fact that it is a beloved classic device (we even celebrated its 10th birthday here on the blog), most people contributing to postmarketOS are focusing on other devices.

After a last call we had to drop it from the release and will soon move it back from the "community" device category back to "testing". In the near future, there won't be new pre-built postmarketOS images for the N900 available anymore, however you can still run pmOS edge on it if you do the installation with pmbootstrap. Just be aware that there most likely won't be any upgrades to the kernel etc. unless you contribute them yourself.

Another option for N900 users is checking out the port from our friends at Maemo Leste, which is still actively maintained.

The new release includes all but the most recent improvements that were made to postmarketOS edge. Check out the postmarketOS podcast where we discuss these in detail.